LEAPS as a Substitute for Stocks

Options investing is a great vehicle to enhance your portfolio returns. But, people are often confused as to which option contract to choose. The situation is complicated because you’ll have to choose from many different strike prices, across several expiration dates. 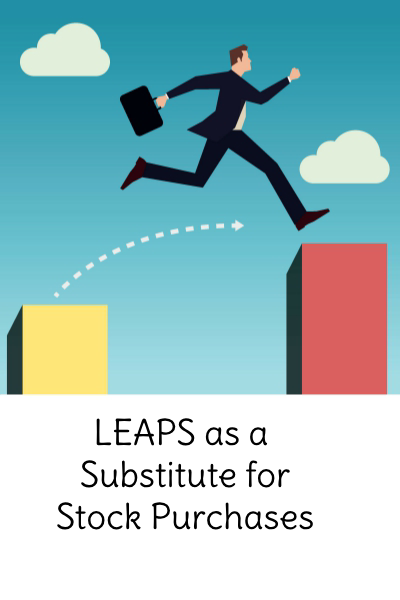 Using LEAPS, short for Long Term Equity Anticipation Securities, are a great way to leverage the use of options without worrying too much about which one to choose. There are still choices, but if you keep the concept simple, you should be able to successfully use this vehicle.

LEAPS are simply options contracts whose expiration date is sometime out in the future, usually at least a year away. You can find out immediately how long these options have until expiration by looking up an option quote on Finance.Yahoo.com. Select the ticker of the stock you want an option price for and select the Option menu item or tab. You will see expirations for January of a year or two from now. Depending on the time of year, you may even see expirations for longer than that, like three years.

There will be several choices for the LEAPS contracts, but they’ll be far fewer of them which limits your choices. Fewer choices make the selection process easier.

To make it even simpler on yourself, create a rule on how you’ll handle the contract selection. For instance, you could choose the option contract strike price that is closest to the underlying’s actual price.

Let’s use an actual example to illustrate. At the time of this writing, eBay was trading at $34.60 per share. For this example, this is close enough to $35 and that is the strike price we will focus on. The expiration for the LEAPS are January 2018 and January 2019. Let’s choose the 2019.

The Risk Is Less

As you can see from the example, your risk is much less with the LEAPS than the outright purchase. If there is a huge decline in the price of the stock during that period, you will lose no more than the $480 that you spent. Plus, because the option has a year-and-a-half before expiring, there is plenty of room for fluctuations on the stock (in both directions).

The risk is not eliminated completely with LEAPS. They will eventually expire even though the date is far into the future. That date arrives quicker than people realize. If the market is strong, and you chose the LEAP of a company who has solid economics, you should be fine. However, there is no guarantee of this.

You should not misconstrue the information in this article as investment advice. Also, even though the risk is less than an outright purchase of the stock, it doesn’t mean it is riskless. $480 still hurts to lose, just not as much as the thousands that you could lose with the outright purchase.